What is Parallel Charging?

The big advantage of parallel charging is that it saves a lot of time. Charging a pack, unplugging and charging another isn't very efficient. Why not charge them all at the same time?

In a parallel circuit, the voltage remains the same, while the capacity is added together. In a series circuit, the capacity remains the same, and the voltage is added together. Both are advanced charging options. The choice of how to charge depends on the current restrictions of your charger and power supply. More information about series charging can be found on our Series Charging article.

Parallel charging only works on same cell batteries. This means you can't charge a 2s and a 3s at the same time, but they can be different capacities, within reason.  The batteries can also be at different states of discharge, again within reason.

Parallel circuit, as the name suggests, joins the positives and negatives on each terminal together. The capacity (or current) is added and the voltage remains the same. While a series circuit, as the name suggests, is connecting the positive and negative terminals in a daisy chain leaving one free negative and one free positive. The total voltage measured across these two terminals is the total of all the voltage in the series chain. Understanding the watt equation is the foundation of most electrical applications, as well as the charging of any battery. The equation, in its simplest form is:

By re-arranging the equation we can establish:

Bearing in mind that this is the equation is in its simplest form, and does not factor normal energy losses, such as heat and wiring. The battery voltage also differs from the beginning of the charge cycle to the end of the charge cycle.

As mentioned, Lithium battery chemistry is a volatile mixture. One battery catching on fire due to unsafe or improper charging is bad enough, never mind several batteries all hooked up in close proximity to each other! More information on Lipo battery safety can be found in our Lipo Battery Safety Guide.

How does it work?

When using a good computerised balance charger with correct parallel wiring (for both main leads and balance leads) the current would flow between both packs. The voltage would be adjusted until they are all equal. This is the basis of balance charging. The charger only "sees" one larger pack and charges it as if it were a single pack. But if the charger only sees one pack, how does it balance all the cells in the different packs?

If something were to go wrong during the charge cycle, it could affect multiple packs. For example, if the charger was setup incorrectly, it would affect all connected packs, instead of just the one.

If the packs are at vastly different voltages when you connect them together in parallel, it is possible that a large amount of current can flow between the packs as they equalize themselves. In most cases this will not damage the batteries, but it can damage the wiring. The battery that is drawing the bulk of the available current would get very hot. If you are parallel charging for the first time, keep a close eye on your packs temperature and touch test the wiring and connectors on all the packs to see if any of them are excessively hotter than the others. If this is the case, either reduce the current or charge that particular pack on its own for a few minutes, before you start the parallel charge.

Requirements and recommendations for parallel charging

A parallel wiring adapter for the main leads and or a parallel adapter for the balance leads. This can be for as few as 2 packs or as many as 6, your choice. You can find these in our accessories section. We also build custom versions if there is a particular combination of connectors you are after.

All the packs you charge in parallel must be the same type and cell count. There is no need to match the capacity, C-rating, age or brand for parallel charging. For example, you can charge a 3s 2200mAh 15C Lipo with a 3s 3200mAh 25C Lipo, but you CANNOT charge any 3s Lipo in parallel with a 4s Lipo.

Many people are greatly concerned that when charging multiple packs in parallel, that they must be very close in voltage when connected.  There is also concern that the current that flows between them will be very high and cause harm to the Lipos. It is true that large currents can flow, but the sizes of these currents are often greatly over calculated.

If we do this simple math and go no further, we find the initial current flow to be 83.3A or nearly 17C. That looks bad on paper, but in reality it is nowhere near that high because of a simple concept that the straight math fails to take into account. That is that the voltages of both packs will change under load. Basically the more you load (discharge) a battery, the greater voltage drop. This means that the charged pack is no longer at 25.2V when it is loaded. In fact, a 6s 5000mAh Lipo will likely drop to more like 22V under that much load. Notice that it is actually lower than the discharged Lipo. Likewise, the discharged Lipo's voltage will rise under the charging load. The actual initial current flow is not easy to pin down without testing in real life and will change with different packs, at different voltages, and so on.

Basically, it is never a good idea to connect two packs in parallel that are at vastly different voltages, but in this case, the likely end result will be nothing other than 2 packs ending up half charged. 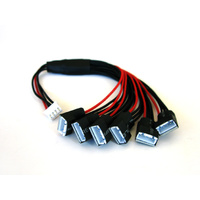 DIY Parallel Charging Board for 2-6s Batteries with Bare Leads 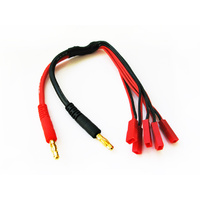 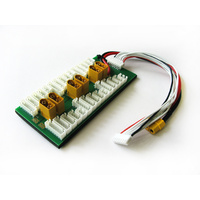