What is Series Charging Much like Parallel Charging, series charging enables you to charge more than one pack at the same time. The advantage of series charging over parallel charging is that it allows you to charge a combination of different celled batteries, as long as their capacities are the same. For example, you can charge a 2s 4000mah Lipo with a 3s 4000mah Lipo. A good computerised balance charger will see one battery that is 5s and 4000mah, balancing each cell evenly during the charge cycle. Please note that ALL the packs MUST be the same capacity. When parallel charging all the packs MUST be the same cell count, but they can have varied capacities.

Essentially, any individual Lipo battery pack is packaged using the same principle. A number of single cells are wired in series to create a 2s or 3s or 4s pack. Series charging adopts the same principle by wiring a couple of packs together to create one large pack. The voltages (or cells) are added together, while the capacity remains the same. While in parallel charging, the capacity is added and the voltages remain the same.

Series charge circuit is a great solution if your charger has a limited total current output but is designed for a large number of cell counts; bearing in mind that neither parallel nor series charging will be of benefit if your battery charger does not have adequate power (measured in watts). If you are using a 50-100w cheap charger, forget about using advanced charging techniques. Not to mention that the safety issue relating to Lipo battery charging is magnified as you have more batteries involved. If you are using a cheap charger that does not offer basic safety cutoff features, it is not advised that you charge more than one battery at the same time. In fact, we would turn our nose up at charging anything at all!

Although series charging offers more accuracy in the charge cycle and the ability to mix and match different cells, the down side is that it is considered to be at the top most of advanced charging techniques in terms of difficulty. The sequence of wiring for the batteries main connectors must follow a very specific rule. This needs to be matched exactly with the balance lead, specifically the position of the negative and positive terminals on all the connectors. Failing to do this correctly will cause damage to the batteries and or charger. This process is therefore not as simple and clean cut as parallel charging as it must be done only one way, as indicated by the diagram below.

Please note: series charging requires advanced knowledge and understanding of charge diagrams, basic electric principles and very carefully planned sequencing of battery terminals. If you are not comfortable with this area, or just beginning, we recommend you start by understanding Parallel Charging and then move on to series charging from there.

Series circuit, as the name suggests, is connecting the positive and negative terminals in a daisy chain leaving one free negative and one free positive. The total voltage measured across these two terminals is the total of all the voltage in the series chain. While a parallel circuit, as the name suggests, joins the positives and negatives on each terminal together. The capacity (or current) is added and the voltage remains the same. Understanding the watt equation is the foundation of most electrical applications, as well as the charging of any battery. The equation, in its simplest form is:

By re-arranging the equation we can establish:

Why would I want to charge in series?

Series charging is faster than parallel charging if the charger has limited ampage output, but has plenty of overall power (wattage).

Say you had a 350w 8 cell Lipo balance charger, such as our iCharger 208B. This charger has an output rating of 20amps and 350 watts. If you had 2 x 2s 5000mah Lipo's and 1 x 3s 5000mah Lipo, you could charge all three packs at the same time. The charger would see one 7s 5000mah battery and you would have 10-13 amps of maximum current to play with. Therefore, if the batteries have a manufacturer charge rating of 2c, you could charge all 3 packs in 30 minutes at the same time, and each cell in each pack is balanced to the exact same voltage. In a parallel charge, you could only charge the 2 x 2s in one cycle, and charge the 3s on its own in another cycle.

Series charging is a great option when the maximum (chargers) available current is limited but the charger has adequate output wattage and total cell count.

Serial balance charging, if done incorrectly, will instantly ruin your balance board or leads. At worst, possibly even your batteries! There is a particular sequence that you MUST follow in a series charge circuit, based on the position of the negative and positive terminals. If they are switched or connected in the wrong order, short circuits will occur.

The series charging diagrams show how the positive and negative of the batteries should be connected. The first battery, with its negative connection directly to the charger, needs to have the negative side of the balance lead also connected to the charger. The second battery, with its positive terminal connected directly to charger, needs to have its positive terminal on the balance lead, connected to the charger also. If you have more than 2 packs, this sequence is even more complicated. Therefore, although series charging provides more accuracy when balancing each cell in the pack, it is not as simple as the parallel charging "set and forget" setup. 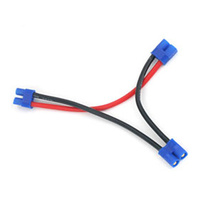