There are many variations of Lead Acid batteries. Each designed for its own particular application with specific discharge and charge characteristics. These battery types are specifically designed for a set designated end application.
It is important to pick the right lead acid battery for your particular application. Failure to do so can reduce performance and in some instances irreversible damage to the battery, resulting in a drastic reduction of its overall life span. The modern wet cell comes in two styles; serviceable and maintenance free. Normal flooded batteries require extra care and regular maintenance in the form of watering, equalising charges and keeping the terminals clean. Flooded cells need to be mounted the right way up and can be susceptible to spillage.

Transporting Flooded Lead Acid Batteries brings with it its own challenges. Classified as a 'dangerous good', flooded lead acid batteries require very specific transportation methods and can only be shipped with accredited dangerous good certified shipping and courier companies.

Commonly known as Valve Regulated Lead Acid (VRLA) or Sealed Lead Acid (SLA). SLA batteries are available in a few different formats. Their principal manufacturing process, including number of plates and plate thickness determines its designated end user application. SLA batteries tend not to sulphate or degrade as easily as wet cells and are regarded the safest lead acid battery to use.

AGM batteries offer the best price point in the Valve Regulated Sealed lead acid variety. AGM Sealed Lead Acid Batteries utilise an Absorbed Glass Matt (AGM) process which is superior to traditional flooded technology. Fine, highly porous, micro-fiber glass separators absorb the electrolyte, increasing efficiency by lowering internal resistance, which in turn boosts capacity. Lower internal resistance also means that the battery can be recharged much faster than conventional flooded or wet lead acid batteries. AGM batteries provide much larger capacity in a smaller case size and are able to be mounted on their side and shipped using standard shipping processes.
AGM batteries are found in many applications and are commonly used in; UPS, alarm and telecommunications industries, golf carts and trundlers, mobility vehicles, performance automotive and much more. As always, it is important to ensure you are selecting the right AGM battery for your application. Although the voltage, capacity, dimensions and ratings may be very similar across a range, each AGM battery has a specific application that they should be used in.

A common misconception is that all "sealed" lead acid batteries are GEL. Gel VRLA batteries contain a gelified electrolyte which differs to their AGM counterparts. Sulfuric acid is mixed with silica fume, which makes the resulting mass gel-like and immobile. This creates a completely maintenance free, non spill able lead acid battery product. Unlike a flooded or wet-cell lead acid battery, GEL cell batteries do not need to be kept upright and can be shipped using standard shipping process'.

GEL's inherit design reduces electrolyte evaporation, spillage and subsequent corrosion issues that are very common in flooded or wet-cell batteries. GEL batteries boast greater resistance to extreme temperatures, shock, and vibration. They are capable of withstanding over discharging, which typically causes irreversible damage to Flooded and some AGM batteries. They are ideal in applications where a constant current is required such as golf carts, mobility, power bank and RV power bank applications.
GEL are generally much more expensive than their AGM and Flooded counterparts. They have a very low discharge rate (1% per month), but they require specific charging practices and need to be charged with a GEL specific battery charger.

Deep Cycle Sealed Lead Acid batteries, as the name suggests, are specifically designed for deep cycling applications. They contain fewer plates than their cranking or starting counterparts. These plates are also much thicker. This reduces the total surface area, resulting in a battery that provides lower max current, but is capable of a much deeper state of charge.

Deep cycle batteries are typically discharged to 50% of their capacity and recharged again. This is known as the depth of discharge (DoD). This level of cycling is generally used in applications where the battery is providing constant current for long periods of time. Such as golf carts, mobility scooters, power banks, RV power banks, Solar energy systems etc.

The basic formula that we follow when recommending a deep cycle battery is to suggest one with a residual capacity approximately three times the estimated daily use.  It is recommended to bring Deep Cycle batteries back up to full charge every few months to maintain their levels true capacity. Failure to do so will reduce the batteries life and over time it will provide lower and lower capacity. Deep Cycle Lead Acid Batteries are usually catagorised by their amp hour rating (AHr). Amp Hour is a measure of the batteries capacity.

Deep Cycle batteries are available in both AGM or GEL variety.

Engine Start batteries have a larger number of thinner plates. The total current output is affected by the total surface area. With thinner plates per battery, the end result is an increased surface area that will provide a much higher current potential.

Generally Cranking batteries differ to their deep cycle counterparts as they have been specifically designed to produce a large burst of current in a short time frame. This is particularly useful in engine starting applications. Cranking batteries are generally catagorised based on their ccA (Cold Cranking Amps) rating. Cold Cranking Amps is a measure of the total current a fully charged battery at -18 degrees celsius can provide for 30 seconds, without dropping below 1.2v per cell (7.2v for a 12v battery). Typically this is 1% of the battery's capacity. The larger the ccA rating, the larger the engine the battery can turn over.

Cranking batteries are not designed to be deep cycled or discharged. They are designed to turn over an engine and sit on float charge which is provided by the vehicles alternator. Discharging a cranking battery will start causing irreversible damage to the battery plates. This will ultimately reduce its performance, total life span and in some cases cause complete failure.

Best of Both Worlds

Known by a few different names, but most commonly as Hybrid. These batteries are designed for both engine starting and deep cycling. This is particularly useful in marine and RV applications where a large cracking current is required to start an engine, as well as cyclic ability to power on board devices and appliances.

These batteries can be found in both GEL and AGM variety.

Standby Sealed Lead Acid batteries are the most basic variety of the Sealed Lead Acid range. As the name suggests, they have been designed only for standby applications where they operate on a float (very low) load, maintaining Uninterrupted Power Supplies (UPS), Alarm Systems, Telecommunications and Network Systems.
Standby batteries are generally of AGM variety.

A marine battery can be cranking, deep cycle or a combination of both. The critical factor that allows this battery to be used in marine application is its construction process.
Marine conditions place a lot of stress and excessive vibration on a battery. Using a standard deep cycle and/or cranking battery for this application will produce normal results in the short term. However, in the long term, harsh marine conditions, excessive vibration and wear will damage the delicate lead acid battery, ultimately resulting in a battery that has lasted considerably less than its manufacturer rated lifespan. Batteries that are designed for marine will be specifically labeled as Marine Grade. Ask your retailer if the battery you are buying is designed to be used in marine conditions.

Marine batteries can be flooded, Gel or AGM. 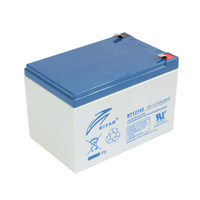 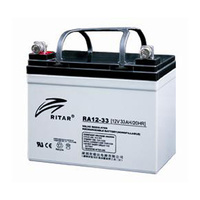