What to Look for In a Charger In this article, we aim to provide an overview of the features you should look for when shopping for a battery charger. Some features are an absolute must, such as safety and accuracy, and some could be classed as luxuries. Ultimately, it makes more sense to make a decision that future proofs your purchase and gets you many years of use, as opposed to having to upgrade a few months after purchase. Safety
Safety is paramount. It should be your number one focus in selecting a battery charger. Inexpensive battery chargers are just that. They are cheap and don't provide the most basic safety features.

Timer cut off: This important safety feature is often ignored. Timer cut off will stop the cycle when it reaches a user set time limit. In the event that the battery charger has not recognised that the battery is fully charged (bad or older battery), the timer limit will provide a safety guard, stopping the charger when reached.

Capacity Cut Off: Much like the timer cutoff, capacity cutoff is a very handy feature. It allows a user set mah rating, that when reached will terminate the charge process. For example, if you are charging a 2000mah battery, you could set the capacity cut off to 2200, and the charger would terminate the cycle once the battery reaches that rating. This feature could also be used to charge the battery half or two thirds full, for long term storage. Power
A common misconception about a battery charger is that the power rating is represented in the output amps. This is incorrect. All chargers claim 10amps or 20amps output rating. This figure is actually not an accurate representation of the chargers true output power. Power is measured in watts, and the watt rating is actually the true "power" of the charger.

Before deciding on a battery charger makes sure you know the wattage of the battery charger you are buying. For example, a 10amp 50watt charger will not be able to provide 10amps on any battery greater than 5 volts. If you were to charge a 3 cell 11.1v Lipo battery with this charger, the maximum current available would be 4.5amps. This is worked out with the amps x volts = watts equation. This equation is the foundation of any electrical application, including battery and/or charger power.

The discharge power (watts) is also important. Most chargers only provide around a 10th of the discharge power when compared to their rated output power. This is completely common practice. Having a powerful charger that provides high output power and high discharge power is very handy. Having the ability to place a 20amp or 30amp (up to 300w) load on a battery, gives you the ability to review the performance of the battery, as if it's being used during its true application.
Accuracy
Buying a charger that is proven to be accurate; is just as important as safety. You need to have confidence that the messages your charger gives you are accurate and true. This can be as simple as telling you that the battery is charged when it is not, or worst, overcharging the battery! This not only reduces the run time and costs you more in replacement batteries, but it's unsafe.
A good battery charger should give you accurate voltage measurements of the battery, voltage of each cell (0.01v resolution), charge current and temperature (both internal and external). If you have access to these readings and they are different from what you experience when using the battery (running time), it's a good indication that your charger is not accurate.
Efficiency
A battery charger that is efficient makes better use of its available power, and is traditionally smaller in size. More power means quicker charge time, less heat, less fan, less noise and smaller overall size. Cheap battery chargers use half their "power" in heat, bad wiring and inefficient circuitry.


Able to Charge Different Battery Types
Most battery chargers are designed for a varied number of battery chemistries. Having a good, reliable, accurate and safe battery charger than can charge NiMh, NiCd, Lipo, Life, Lilo, as well as automotive lead acid car batteries is much more versatile.


Cell Count
Modern Lipo chargers can do many cells counts. Why is this important? Well in most cases, it is simply a luxury. Having a charger with extra cell count will allow you to take advantage of the its power, and charge more than one battery at the same time. For example, you could charge a 2s and a 4s (must be the same capacity!) at the same time. More on Series Charging can be found on another article on our website. Ask yourself, what do I need to charge now and what might I need to charge in the future? This is an important factor in deciding the battery chargers cell count. Are you ever going to have more than one battery? How important to you is the wait time for the charger to finish its job? Balance Charge: Balance charge is a must when charging Lithium based batteries (lilo, Lipo, Life, Lion). The balance charge cycle balances each cell of the battery equally, before it is considered charged. If this option is not available, the charger will stop the charge based on the total voltage; some cells could be overcharged and some undercharged, without the charger detecting it. Your battery will be damaged every time it's charged. You can not charge a lithium battery without using a balance charge cycle!

Storage Charge: A charge cycle that charges the battery specifically for long term storage. Usually 50-66% of its full capacity.

Forming Charge: Forming charge is designed to bring life to old NiCd or NiMh batteries that have had a hard life.


Memory
The ability to save your battery charger settings to memory can be very handy. Having to reset the battery chargers settings, preferred safety parameters, charge current, etc. every time you use it, can be a very frustrating chore and possibly lead to mistakes.


On The Fly Settings
Believe it or not, most chargers don't offer this feature. Nothing is more frustrating than starting a charge cycle and then realising you want to change the current, temperature cutoff, charge time or anything else. Having a charger with the ability to change the settings while it's actually in a charge cycle, is a great feature, and one that you will quickly be unable to do without. Most chargers require you to stop the charger and start again after making changes. This means you lose track of how charged the battery is.

PC Compatibility
PC compatibility may only appeal to a very small percentage of consumers. A charger that has PC compatibility will allow you to analyse battery performance, charge performance and keep a, slightly compulsive, eye on the condition of your batteries. You can log the information, view graphs and more.


Data
A charger that gives you a display of the state of the battery, how long to go, how long it's been charging, voltage, temperature, and the current being drawn is very important. It is impossible to know what is happening with the battery when it is being charged. A LED that is red when charging, and green when it's charged, is not an adequate display for modern battery chemistries.
Size
Well size doesn't really matter, but if you had the option, wouldn't you want a charger that is small and portable?


Portability
Although there are AC options available, having a charger that is portable and can be used anywhere; with any sort of power supply, is far more versatile. Although a DC charger may seem like it's not the easiest option, as you need a separate power supply to run it. Having the option to take it anywhere, gives you a lot more flexibility. A battery charger should be a precession tool that is the foundation of whatever you are running. One that weighs 10 kg and needs a wall socket is not a long term solution.
Features
What other features could you need or are useful?

Monitor: Battery monitor function is rare to find. It's the ability to externally monitor a battery while it is under a load, or being used in its normal application. This is very helpful to gauge performance, measure the discharge curve and more.

Regenerative Discharge: This handy feature is also hard to find. Regenerative discharge sends the wasted energy during a discharge cycle, back to the chargers power supply, recharging that at the same time. Obviously, the power supply needs to be rechargeable, such as, an automotive 12v car battery. This will allow you to achieve high discharge currents (at times matched by the output current) and also make use of the wasted energy. A battery charger with regenerative discharge functions will also be smaller. This is because normally, in order to achieve high discharge currents, the charger burns the energy over a transistor. This gets very hot and requires large heat sinks and fans to keep it cool, making the battery charger the size of a suitcase! 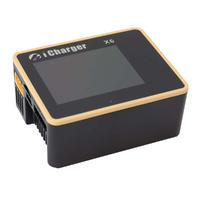